Talk on design and composition of felted wraps. Part 3 - Dynamics and Movement

This is Part 3 of a translated transcript of the Russian felt artist Maria Gladchenko talk.
https://www.facebook.com/maria.gladchenko?fref=ts    http://www.livemaster.ru/madsilkworm
Part 1 - is Here
Part 2 is Here

In Part 3 she is talking  about Dynamics and Movement.


If we want to use a lot of small elements in our wrap and create well balanced piece we need to arrange the bits properly, give them direction and create flow and movement. 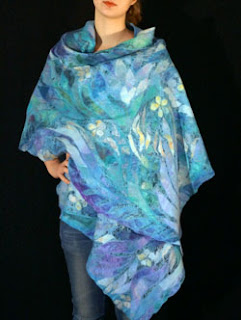 We need to be sure that this multitude of small elements is not positioned randomly or just thrown together but arranged so that all of them have got general direction in common, a flow similar to some nature phenomenon like fluid and harmonious movement of shoal of tiny fish. 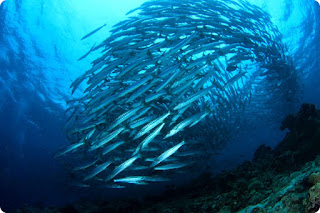 The dynamic is always associated with organic movement of life and nature in contrast to static and geometrical compositions which are often considered as artificial and somewhat industrial. Fluid movement of the nature is the source of our inspiration. 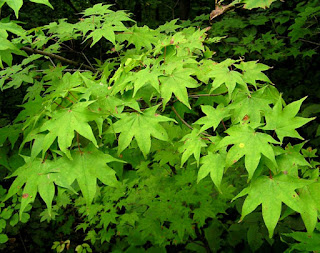 This picture of a beautiful maple tree may look as a random array of small elements but it’s just at first glance.
There are a few centres from which the elements are spreading in groups and in different directions. Every branch is equivalent to a group of similar elements with their own directions of movement. We could do the same in our composition of the wrap, we group details.   At first we define the position of the centres of the flow – the largest or the brightest or the most prominent element.


This arrangement should be done according to the same recommendations as above ( avoid stark symmetry, consider how it’ll look wrapped, balance…)  When we decided on the position of the main central elements we can start filling the entire surface of our piece working with the array of small elements.
Here the small leaves follow the lines of the wrap folded around the figure adding the softness and feminine feel. 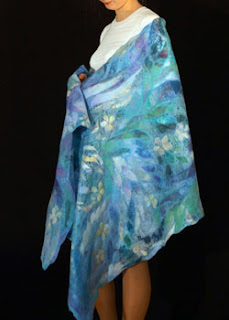 To create more dramatic impression and add more energy to our composition we can use more vibrant elements like this spiral design with the centre of the spiral positioned just off geometrical centre of the wrap. 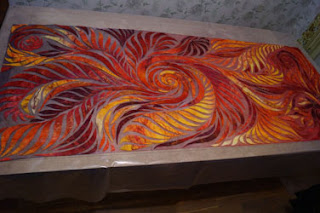 And here is a finished piece in all its glory! 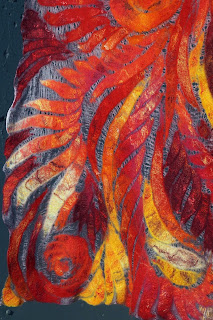 The End!
I'd like to thank Maria again for the generosity in sharing her knowledge and experience!
Posted by Felicity at 11:04 No comments:

Talk on design and composition of felted wraps. Part 2 - Balance and Symmetry


This is Part 2 of a translated transcript of the Russian felt artist Maria Gladchenko talk.
https://www.facebook.com/maria.gladchenko?fref=ts    http://www.livemaster.ru/madsilkworm
Part 1 - is Here

In Part 2 she is talking about scale, balance and symmetry.


Now let’s talk about the wraps designed without any borders, where the central area is the main feature of design and creates major visual impact. The rectangular shape of wrap or scarf may deceive you and create an illusion of being a picture. Pretend to be a picture it persuades you to fill the whole space of the wrap and create a real picture like a piece of fine art. But you need to be warned that the wrap is not a picture in this context. And it can’t be.
Let’s have a look at this wrap as a very good example. 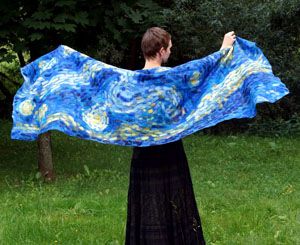 It was inspired by world known work of Vincent Van Gogh. Despite obvious similarity it’s not a literal copy. The colours and style are very similar but there is no such thing as a horizon line and no cypress trees. Why?  When the wrap is draped around the shoulders the dark spots of trees will be positioned at wrong place and the distinctive shape of the trees will be distorted and unrecognisable and look just as splash of dark colour.
The same it’s true when the entire space of the item is occupied with large single image of some face or figure and alike. After you place the wrap on the shoulders the images will not look as they intended to be. To illustrate it we show this beautiful piece with striking figure of panther. 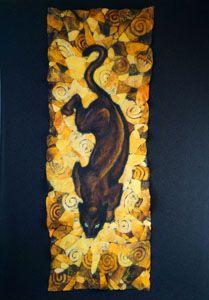 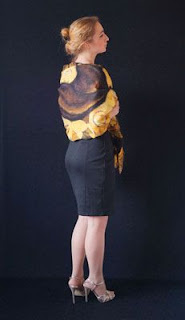 Apparently this interesting idea of creating a picture doesn’t always work!
But it could work – if we consider Scale first. It may work if there were a few much smaller cats’ figures instead of one very large one. 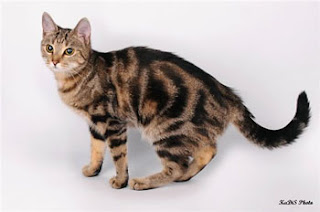 There is a variety of sizes of dark and light markings changing their shapes and creating a sense of movement and direction.
One of the Maria’s lovely pieces as an example of thoughtful approach and right choice of the elements’ scale 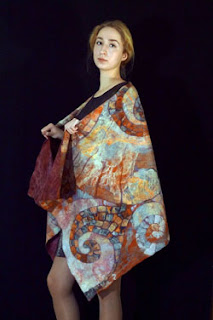 Another feature of the rectangular shape which could lead to wrong design is its symmetry. Very often it seems obvious that the design should be symmetrical with the compositional centre placed in the centre of the item. 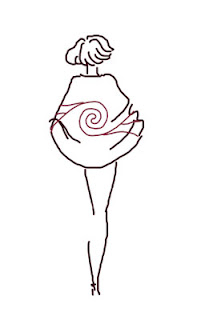 We decided to create a symmetrical spiral. If it’s in the very centre it’ll draw all the attention to this point which is not very good actually. Even worse in reality it’ll never be at the geometrical centre. More often it will be off centre and create disproportion so it would be more practical and attractive if we position that spiral close to one end (a shoulder) 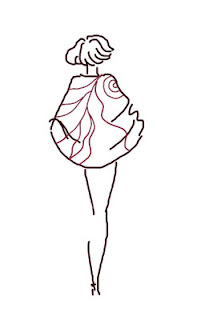 See this idea realised in this example: 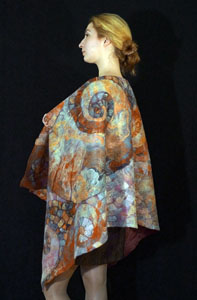 So - when we are to create a symmetrical design on the central part of the wrap which will be on the back of human figure it’s better not to place large distinctive elements (geometrical or colourful) strictly symmetrical or in the very centre. It’s more advisable to position them off centre and in some random order. 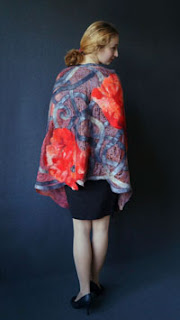 But when symmetry works well? Imagine the design of the future wrap as follow

Another design approach is to make the ends completely different 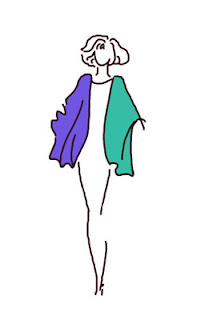 . And again it will look better if the dividing line is not in the middle but is slightly off centre

Or it could be the gradual change of colour 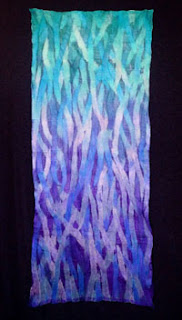